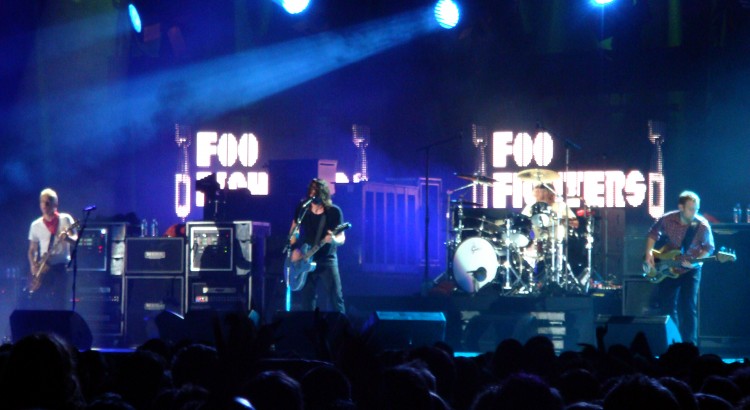 This past Sunday night at Fiddler’s Green Amphitheater (one of my fav outdoor concert venues) in suburban Denver, CO, 20-year Rock & Roll vets the Foo Fighters took the stage amid a jam-packed theater full of fans. The listed capacity for Fiddler’s Green is roughly 18,000, and if you had asked all 18,000 fans at the show that night if they’d like to be pulled on stage during an acoustic rendition of classic Foo tune ‘My Hero’, it’s highly unlikely you’d have had more than a handful of dissenters (if any)!

One lucky man had this become his reality on Sunday night, as front man Dave Grohl (from his “throne”, a necessity this tour since he broke his leg during a show in Sweden…AND KEPT PLAYING) spotted a man, aged undetermined but probably between 35-40, in the pit with tears in his eyes as Grohl and other band members launched into ‘My Hero’.

Grohl eventually invited this man, (Anthony), on stage for the rest of the song! A once-in-a-lifetime occurrence that every other fan in attendance was at least slightly jealous of, and it came out of a totally spontaneous situation of chance. Last week, I was at the Dierks Bentley concert at Fiddler’s and witnessed the same type of experience (although the lucky fan ended up “shot gunning” a beer with Dierks—cheers)! So, I had to ask myself…what if this spot had been determined by a contest?

Contests are a fabulous way to increase brand awareness, especially if your prize is enticing. A chance to be on stage with the band is a choice prize in any setting, and when that band is Foo Fighters during their newly dubbed ‘Break A Leg’ Tour it could have provided remarkable results if structured as a contest instead of an act of chance.

Imagine 18,000 willing Foo Fighters fans before the show with the ability to enter for a chance to take the stage with the band…it would have been a veritable treasure trove of consumer data for important brand messaging later down the road (although it would have entirely removed the spontaneous nature of the act, which was a good portion of its overall charm).

If you have something your audience would love to win, you’ve got the primary component of a successful contest. Combined with a fully integrated social approach that drives business, you can expand your market base and start driving new business today! Use social to go viral and let your audience carry your message—ask yourself this question—“what would my potential customer be willing to share with me (name, address, phone number, 10 minutes of their time, etc.) to win a chance to party like a rock star, with a rock star”?

3 thoughts on “Everyone Wants To Be ‘Chosen’: The Power of Contests for Your Business”